As a magnificent piebald stallion, Stenthor is a worthy son of his father to who he resembles in all aspects. He combines his reactivity, his power, his respect and exceptional style over the fence. Gifted with extreme kindness, he only seeks to do well. With such a harmonious body he should transmit his several strengths. Referring to his colour, his 2 brothers and sister are piebald aswell.

From a sports point of view, Stenthor has had a remarkable season as a 4-year-old jumping 13 clears out of 14 starts combining his sports career with his service at stud. He never loses focus. Stenthor is a large horse combining a perfect model with a gifted jump.

At the age of 5, Stenthor has taken the time to be produced in order address the 2012 season with a bang. This year he has acquired an ISO of 140 without any experience at the age of 5.

Stenthor shows a great will and fantastic usability. He is not spooky and only wants to do well. He impresses all his riders.

The first foals of Stenthor are born in 2011. They show a lot of strengths and a great neckline. The majority of breeders who had faith in him remained loyal to him afterwards. Stenthor imports power and blood into his production with a golden mind-set. All his offspring is very human and playfull.

We would advise him to mare with a strong and tight back. He will import power RAYON and superb technique. Stenthor has a lot of INFLUX and natural respect for the jump.

300€ upon reservation for 24 straws, transport of only chilled semen included and 600€ by 1/10. The covering will be postponed if the foal is alive-dead. For the 2013 season, Stenthor will focus on his sports career and only frozen semen will be available through the whole of France. 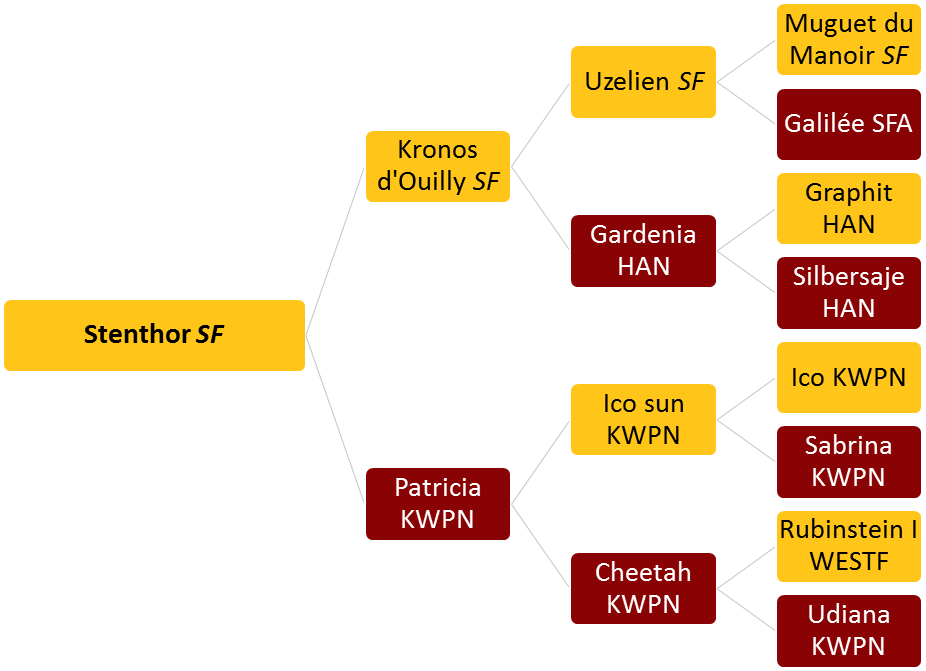 Kronos needs no introduction. On the ranking list of 2009 he was 8th world wide and best stallion. With an ISO of 178 he was just behind his sister who was the runner-up, behind Shutterfly. The family needs no presentation. Kronos listed 90% placings with Michel Robert in show jumping.

Patricia by Ico Sun comes from a very versatile Dutch damline. In this family we find performers both in show jumping as in dressage as far back as we can.

Patricia by Ico Sun comes from a very versatile Dutch damline. In this family we find performers both in show jumping as in dressage as far back as we can.